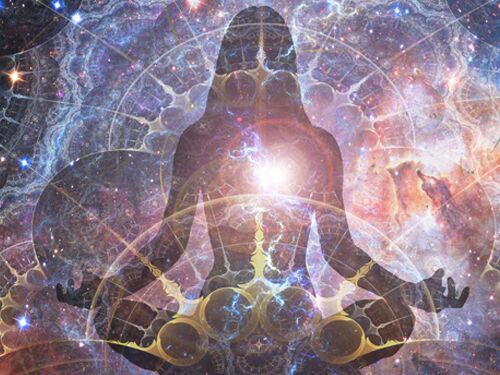 And with this we cut out enormous pleasure possibilities.

We created a model of performance for sex, which often is not about pleasure, it’s about having ‘an orgasm’.

Intimacy, connection, even love, is often secondary in this.

It’s created a space where the power dynamic has put pleasure in the hands, or other things, of someone who has to give you an orgasm, has to make you come. And if you don’t then something is wrong.

It’s very much doing sex. And in this, some people will do it better than others, and therefore achieve, that word again, greater satisfaction.

The phrases ‘sexual satisfaction’, ‘sexual gratification’, have become so linked to ‘an orgasm’.

Let’s take ‘an orgasm’ away for a while.

Let’s talk about being orgasmic.

In the ocean of pleasure, which has limitless possibilities, an orgasm is but one stream.

And maybe, just maybe, because for so long we’ve been convinced that a few contractions and a short-lived explosion is an orgasm, we’ve lost sight of the fact that there are other experiences that are orgasm and orgasmic.

And let’s talk about the fact that for so long so many women have been judged less than, lacking, even sexually incomplete, for not having ‘an orgasm’.

And if their lovers can’t make this happen then they’re incomplete, incompetent, less than, ego bashed men or women.

When we make sex about orgasm, and it doesn’t happen, we create stress.

We know that stress is the greatest cause of illness, disease, dis-ease and more.

Intimate, tender, connected, loving sex produces the most amazing chemicals in the body to create relaxation, health and so many other healing states. It’s one of our body’s most amazing abilities as a self-regulating, self-healing organism.

When we’re striving for an orgasm we’re a little off the path.

And when sex can be about intimacy, and it becomes about orgasm, we’re a little off the path.

When it becomes about being orgasmic, things change.

Let’s put expectation aside, and I’m going to digress for a moment here.

When we do the same thing all the time, which is what so many of us do, have done for so long, our bodies follow the pattern, we don’t connect with what we’re really experiencing right now. Which means we’re not really present.

And more than that, when we’re doing what we need to have ‘an orgasm’, we’re not so present either, because we’re focusing on the what we have to do to get there.

As if There was everything.

Let’s slow it down.

Let’s allow ourselves to feel.

Let’s learn to follow the sensations, allow them to develop, to deepen, to expand to see where they go, to follow them as they move through the body.

The pattern is big here.

Our bodies know what we need to do, or not, to have ‘an orgasm’. It becomes a pattern.

When we change that, when we begin exploring what orgasmic means, when we begin feeling different things, we have to understand that it takes some time to create new connections.

In one way, ‘an orgasm’ has disconnected us from being orgasmic because it’s all we focus on.

‘An Orgasm’ is often the end.

Orgasmic is the beginning.

It’s becoming. And becoming is expansive.

Out of love for yourself.